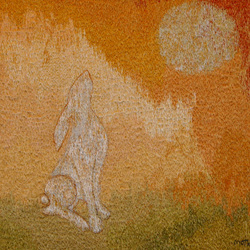 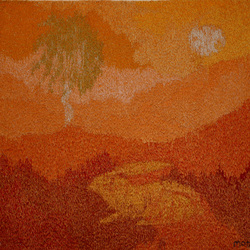 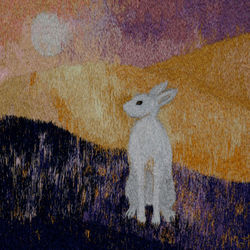 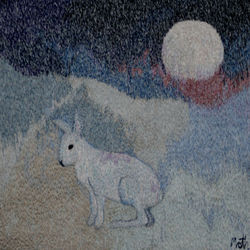 In the late 1970s artist Kit Williams created Masquerade: a children’s book with a twist, which caught the imagination of adults and children alike, to the point of obsession.The book contained 16 detailed paintings illustrating the story of Jack Hare, who is recruited to deliver a token of love between the moon and the sun...on reaching the sun; Jack discovers he has lost the token.It then became the quest of the reader to decipher clues given in the pages to locate the lost treasure.

The treasure was a large, bespoke 18 carat gold filigree hare, studded with  jewels, which Williams buried,sealed inside a ceramic hare-shaped casket,to protect the treasure from the soil and also thwart any attempts to locate the treasure by using a metal detector. The casket was inscribed "I am the Keeper of the jewel of masquerade, which lies waiting safe inside me for you,or eternity".
**********************

"If I was to spend two years on the 16 paintings for Masquerade I wanted them to mean something. I recalled how, as a child, I had come across treasure hunts in which the puzzles were not exciting nor the treasure worth finding. So I decided to make a real treasure, of gold, bury it in the ground and paint real puzzles to lead people to it. The key was to be Catherine of Aragon's Cross at Ampthill, near Bedford, casting a shadow like the pointer of a  sundial."...Kit Williams
Moira Third visual artist