Memory and the object:

“We build statues out of snow, and weep to see them melt”.  Sir Walter Scott

As a teenager I was bequeathed an antique Chinese Ginger jar by a great aunt: a beautiful object, full of the mysteries of time and the Orient. I grew up in my grandmother’s house and the jar sat on top of one of her many display cabinets. My Grandmother was 90 years old when she had her first hospital visit, she had fallen over whilst collecting fallen plums from an old tree in the garden and we suspected she had broken her leg. She was in hospital for a week; they discovered all sorts of ailments, treating her with a plethora of drugs. We put her bed in a downstairs sitting room for ease of attending  to her and conveniently situated next to the bathroom. She stumbled when trying to get out of bed and fell against the cabinet sending my precious ginger jar first into the air and then into pieces.

As teenagers are wont to do, I selfishly cried for at least a day for the loss of my jar. My father patiently glued it together and where one piece was too badly damaged, stuck a piece of coloured paper over the hole.

Both my grandmother and my father have gone the way of the flesh. I miss them both and continue to lament their passing.

I still have the jar. 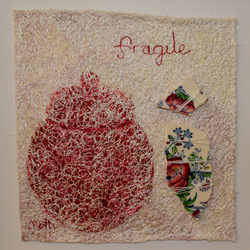 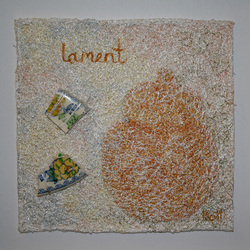 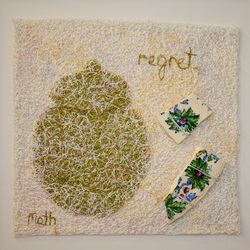 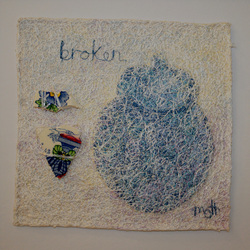